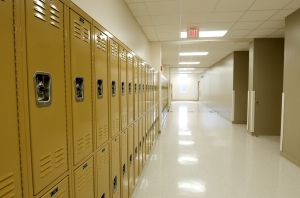 Now that everybody is back in school (no smoking in the boys room….get back to class buddy!!!), I thought I would put together a different kind of playlist for this month. I was thinking about all of the movies I could remember off the top of my head that were either about school, took plays near a high school or college setting and the kinds of songs featured in those films. I reflected on my own personal memories of school and thought that September was a great month to do this in. At this point you basically are settled in to your classes, lockers, sports, college dorms, after school activities and have established the bands that you’re currently digging (listening to).

These movies are all great, IMHO. In a nutshell, they’re all related to school, for one thing. But it goes beyond that. Teen pregnancies, big parties, being popular, smoking dope, working at a record store, the nerds, the princesses, the jocks, the basket cases, the rebels, the inspirational teachers, the drunks, the dropouts, cruising around in sport cars, hanging out at the diners, running for student council, school dances, dating, rock n roll, vacation plans, jogging in track, getting into trouble and simply living life as we know it. The soundtrack to our lives as teenagers and early adulthood.

I came up with a list of 17 films (She’s Only Seventeen) to represent this theme. Now I suppose I could dissect every film here and talk about all of my favorite scenes. My focus here is a MUSIC playlist. So I chose a song from each film. I will list the songs here, in no particular order with the title, the artist, the film and the scene its played. I will try to make you all proud. Here it goes:

1. “Somebody’s Baby” by Jackson Browne: Fast Times At Ridgemont High (Mike and Stacy “making out” in the dugout. Plus its essentially Stacy’s theme song)

2. “Don’t You (Forget About Me)” by Simple Minds: The Breakfast Club Main theme at the beginning of the film and at the end. before and after detention)

7. “Stranglehold” by Ted Nugent: Dazed and Confused (played during a scene where kids are smoking pot in a friend’s room)

8. “(We’re Gonna) Rock Around The Clock” by Bill Haley & The Comets: American Graffiti (The entire soundtrack is full of hits, but this one opens up the film and sets the tone really nicely)

9. “Jennifer Juniper” by Donovan: Election (Tammy meets Jennifer at the “all girls” academy)

10. “Twist and Shout” by The Beatles: Ferris Bueller’s Day Off (The parade scene where Ferris sings on the float with the ladies—“flash mob” style)

13. “If You Were Here” by The Thompson Twins: Sixteen Candles (Jake﻿ Ryan and Samantha kissing over her birthday cake by the window)

16. “All I Want Is You” by Barry Louis Polisar: Juno (Opening sequence with Ellen Paige walking around with Sunny Delight bottle)

17. “Under The Milky Way” by The Church: Donnie Darko (“Donnie (Jake Gyllenhaal) under the great southern sky in a room at a party, in a tangent universe in a small town, the scene is set for what donnie might be experiencing, not only rabbit but slinky the fm radio station!
::: to the backgroung music of the band the ‘church’ fronted by steve kilbey.”—Unknown 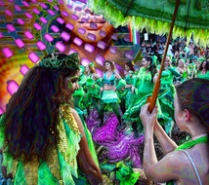