“Shiny and Oh So Bright“

On Monday, August 13 my friend and I went to see the rock band, The Smashing Pumpkins at the United Center in Chicago, Illinois. They were touring this year in celebration of their 30th anniversary as a band. There has been so much personal drama surrounding this music group ever since the mid-1990s.

The drummer (Chamberlain) gets fired from them in 1996 because of involvement with drugs and the death of a former keyboard player but then later returns. Their bass player (D’Arcy) is fired and permanently replaced in 2000. But I know one thing is for sure, the music sounds great in the studio and live.

I think Smashing Pumpkins were one of the greatest rock bands of the 1990’s, easily.

Billy Corgan has been one of my favorite guitarists. His work on the studio albums Gish, Siamese Dream and even Mellon Collie and the Infinite Sadness (1995) is brilliant, layering guitar upon guitar with brilliant riffs and awesome solos.

His lyrics are often depressed and angry, but they show hope and beauty too. Lyrics aren’t usually as important to me as music, but Billy Corgan writes good ones, in my opinion. For a rock star, he surprises me with that kind of songwriting talent.

When I first got into the Pumpkins back in 1991, I didn’t like Billy Corgan’s voice that much, but I grew to really appreciate it. The wall of sound created by Billy Corgan’s guitars combined with his original voice and songwriting is also backed up by the experienced drumming of Jimmy Chamberlain. He used to be in a jazz band apparently, and the guy definitely knows what he’s doing. 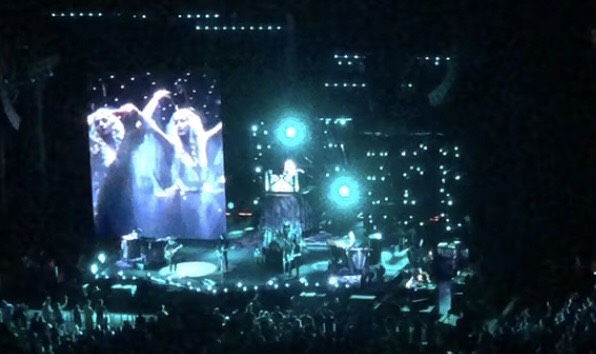 James Iha and D’arcy are respectively great rhythm and bass guitarists as well but they are unfortunately known more for their live contributions because Billy tended to prefer taking over in the studio. This was always the one controversial fact about the pumpkins.

But to see them live again for the first time since the fall of 96 was absolutely mind-blowing. This show lasted way past 3 hours but contained about 31 songs that spanned highlights from all of their studio albums. There were montage videos (D’arcy was unfortunately edited from some of the classic videos), bright and shiny lasers and colored spotlights that enhanced the already intense amplified sounds of guitars and drums just charging at you like a rocket!

I was quite satisfied seeing them again. This show was way better than the one I saw over 20 years ago. Much cleaner, tighter and I finally got to hear Jimmy’s fantastic and spot-on drumming since the last time I saw them, he was temporarily replaced by the drummer from the alternative band Filter. Yes there was no D’arcy but I’ll settle for 75% of the band.

Even on a Monday night with a wife and kid back at home and with my impending daily job still waiting for me at 8:00 am the next day, the wild and crazy concert was worth it.