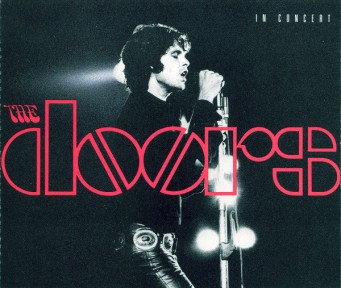 I know…it’s been a LONG time since I have posted here. My wife and I had a baby boy in October of last year. So I’ve been a little busy, to say the least. But anyway, I am still obsessed with music, more than ever. It’s what keeps me sane. So for my new post and possibly a weekly series, I will discuss my favorite LIVE albums and why? I plan to share the stories about what got me into them and memories I have associated with these discoveries. This could be fun, I think. So let’s kick things off now with “The Doors In Concert.”

My first selection comes from 1991 when I was a sophomore in High School. There are many offerings from The Doors but I wanted to focus on my first experience hearing them play live for the first time. This recording is an expanded version of “Absolutely Live”, that came out in 1970. “Alive, She Cried“, from 1983 was basically merged with that record to create the double live album “The Doors In Concert.”

But before I get into this, I wanted to say that the first compact disc I ever bought was the soundtrack to the film The Doors directed by Oliver Stone and starring Val Kilmer as Jim Morrison. It was a great movie. The soundtrack was a really nice selection of Doors music that ultimately sparked my interest in the band.

My first experience with this live compilation was on the Chicago radio station 105.9 WCKG. This was a classic rock station. Air personalities included Mitch Michaels, Patti Haze, Allan Stagg, Joe Thomas and Debbie Alexander. On Sunday Nights, there was a program that was entitled, “The Seventh Day.” In the beginning the host (Joe Thomas I believe) would play album sides (A or B). Later he expanded it to entire albums. This was a vinyl record experience on the radio. He would play about 3 albums in a row. The program ran for about 3 hours every Sunday night.

One night they played The Doors In Concert. So in my fifteen year old mind I didn’t know of any other recordings other than the soundtrack I previously mentioned. Certainly nothing else live by them. This was definitely my first exposure to live Doors music. I would get fascinated when the DJ would tell us what was coming up soon. I would get my cassette tapes ready. I’d buy the tapes in advance or permanently borrow a couple from my dad. It was exciting loading them into the tape deck and prepare for something amazing. When he put on that double LP, I was really excited. So once things got kicked off, I hit record on the tape deck and just let the music play away.

This was well before the internet and iPhones or even the ability to borrow cds from the library. Back then, it was my way of listening to albums and recording them onto cassette tapes in order to keep hearing them over and over. Yes I come from a generation where we taped music off of the radio. Some really cool choice albums our radio disc jockey would play were: Pink Floyd’s The Wall, Dark Side of the Moon and Wish You Were Here. Mr Thomas would also play The Beatles’ White Album, The Eagles’ Hotel California and Iron Butterfly’s In-A-Gadda-Da-Vida to name a few.

So I remembered I ended up filling up two cassette tapes back to back with the music. So it was two hours practically of The Doors. I still have the tapes from 27 years ago, which is pretty amazing. Some might say negative things about this double album. Things they might say would be that these performances were pieced together and was edited in such a way that these weren’t complete shows. But again, the mind of a fifteen year old doesn’t necessarily know that. He just hears cool live music with the audience cheering and commenting.  To me it just seemed pretty awesome. It was radical. It was rebellious. And in your face.  Kind of raw and yet polished.

But I realized that there were various shows from Pittsburgh, Boston, Vancouver and New York. Places like San Fransisco’s The Matrix and the Hollywood Bowl were all sources that they drew the music from. At the time I first heard this arrangement of music, none of that mattered. In fact, looking back on it now with this knowledge, I am amazed how great this was all pieced together to give it a nice flow. I enjoyed it very much. Not only did I hear it while it was playing on the radio but I also listened to it in my dad’s pick up truck while we were heading out to Wisconsin on a camping trip. We enjoyed listening to it together on the trip.

My exposure to them live was hearing the 1991  compilation. That’s just how I heard it the first time and got the most comfortable with in that form. But the music was great! I didn’t care that it was edited like crazy. Especially the version I heard which was longer than “Absolutely Live” or “Alive, She Cried.” It was a stroke of genius that it sounded so well and nearly flawless. It’s very accessible and really packed a punch. It doesn’t exactly sound butchered by any means. It’s amazing actually.

So if you like The Doors. The poetry of Jim Morrison and his unpredictable behavior and screaming and then yelling at the audience and then collapsing on stage combined with the guitars, drums and wild keyboards then you can’t go wrong with this very thorough live experience. Plus its one of the rare moments where we are treated to the complete rendition of the masterpiece poetic story of The Celebration of the Lizard. See the cassette tapes below? Those are mine from the 1991 recordings.

Anyways, this is just part one of many blog posts where I will discuss some of my most favorite LIVE albums. I hope you enjoyed the story. Please feel free to post comments. Peace out!

This is the first posting for this new mini-series…

In 1993, towards the end of my Junior year in High School, I bought my very first car. I was only 16 years old. I worked at an A&W Restaurant flipping burgers and mowed the lawns at the Fire Department. I saved my money and purchased this mighty used car you see here, down below. The car was a red Dodge Omni and had an old “toolbox”, kind of rusty and moldy smell to it. The windshield was cracked already (eventually my dad replaced it), the vinyl seats were hot in the summer and cold in the winter. My car had a tape deck in it. I was starting to collect more cd’s around that time so I had to buy some blank tapes and then record my cd’s onto them so I could listen to the music in the car.

I had to be entertained whenever I took a ride in this “Bloody Gremlin” looking vehicle! I never really drove far. I drove to school and back home. I went to the gas station or the local White Hen Pantry. It was all about looking cool. One time I drove it out of town to show my Grandma and Grandpa. My Grandma said we could go for a ride around the block. I had a tape of Stone Temple Pilots (Alternative Rock Band from the 90’s) playing somewhat loudly. I turned to grandma, as she was buckling her seatbelt. I said, “Oh let me turn that down.” She said, PLEASE!!!,” with somewhat of disgust. But it was still a nice experience with Grandma. Unlike how my own mother and father shrieked in blood curdling terror whenever I drove! AHHHHHH!!!!! NOOOOOOOO!!!!! JUST PULL THE CAR OVER!!!! White knuckles and all! LOL

I listened to bands like R.E.M., Lenny Kravitz and Smashing Pumpkins. One day, I had just about had enough of my tape deck because it was slowly starting to eat my tapes, they would get jammed in the machine or just simply start to distort their sound. Everything would sound all warped and in slow motion. As I was cruising through my hometown listening to the Pumpkins, the tape deck was trying to vomit out my tape and I had decided enough was enough. I ejected the tape and threw it out of the window, over the bridge I was driving across and into the Fox River. Never to be heard again! It was a quick relief! It was easier than trying to rip the tape deck out altogether.

That summer of 1993, I worked at the high school I went to as a painter and a janitor helper. There were about a dozen of us working in various buildings scrubbing floors, cleaning windows, etc. I was excited to listen to some Tool and Manowar in my car as I was leaving for the day to head home and embark on a mini vacation with my sister and parents the next day. But as I pulled out of my spot and began to “peel away!” I backed into a lady’s van and just kept on going! Perhaps the heavy metal blaring through my crappy speakers distracted me and I was oblivious!

After I got home, I was jumping on the trampoline with my sister and just hanging out in the backyard. The phone rings. My mom answers. She is not happy. “WHAT?”….she says “MY SON?”….she asks. I got into verbal trouble but nothing serious. Luckily it was a mere fender bender. Maybe I should mention here that I had obvious and memorable vanity plates that said “NOE 94” on them!!! LOL

These are the musical memories I think of when I talk about the Red Dodge Omni. Please share some of yours in the comments section below. Later!