Ok. I need to get this off of my chest. Today’s music does NOT suck! Every generation has their highs and lows. The inevitable “good, bad and ugly.” It happens decade after decade. But honestly, what is a “real musician?”  They come in many forms. Singers, songwriters, multi-instrumentalists, etc. You cannot claim that today’s music sucks, because that’s not true. Like every other decade over the years, there is most definitely CRAP. But there are also some really fantastic artists, albums, songs, inspiration, catchy hooks and memorable moments.

What I am trying to address here is the following 4 points:

1) What is a real musician?

3) Is there something WRONG with Katy Perry or Imagine Dragons?

4) Is today’s music ONLY catchy and NOT inspiring?

1) So…what is a REAL  musician? Well that can be tricky…but not really. According to various sources; such as the Oxford Dictionary and the MacMillan Dictionary:

“A musician (or instrumentalist) is a person who is talented in making music or performing music creatively, or one who composes, conducts, or performs music (particularly instrumental music).

“Musicians can specialize in any musical style, and some musicians play in a variety of different styles. Examples of a musician’s possible skills include performing, conducting, singing, composing, arranging and the orchestration of music.”

Lady Gaga is someone whom I am not a fan of. I respect her music. I don’t have to like her but she DID learn how to sing and play piano as well as many other instruments and she puts her music together.

Nicki Minaj: she’s a singer/rapper, which she normally describes herself as, not a musician. She’s also an artist. NOT a musician.

Kanye West: Rapper, artist, can he play an instrument? He often samples other people’s music but then writes his own additions to it.

Taylor Swift is in fact a Musician (not one that I care about much) but she is something of a teenage heartthrob and only writes about relationships. but DEFINITELY a musician.

The Beatles… Duh? I should just bitch slap you if you say otherwise!

I agree that Neil Young, Willie Nelson and Bob Dylan are all MUSICIANS (REAL ONES TOO)

2) The writing team = I believe this can be applied to over 90% of the songs out there (yesterday and today). You don’t have to write your own songs to be good. Elvis, Frank Sinatra and Glen Campbell didn’t write their own songs. Collaborations aren’t new to the recording industry. Producers like Quincy Jones, George Martin and Rick Rubin are what make good music GREAT! Low Fi recordings are good and so are Hi Fi recordings. It is a matter of preference. Do you want your song all polished and pretty? Or do you want it to sound raw and stripped down?

Actors in films read and follow scripts and unfortunately, as viewers, we can easily be tricked into thinking that those beautiful words they utter are their well-acted lines of passion. But isn’t that what makes them great actors? To be able to pass something off as their own in a convincing way.

Even awesome singer-songwriters like Carole King collaborated with other writers to make such great songs.

3) Is there something WRONG with Katy Perry or Imagine Dragons? FIRST of all, you are either a FAN of artists/musicians like these two OR you just simply don’t like their music or care period. No one is forcing you to EVER listen to someone or something that you don’t really want to. That being said, I personally am extremely fond of these MUSICIANS who do in fact ACTUALLY WRITE their music.

Katy Perry, is a singer, songwriter, and actress. She can play the guitar and piano as well. Katy puts a ton of work into her recordings and her live shows. Here is something she recently said about her latest record: She told Billboard, “I know exactly the record I want to make next. I know the artwork, the coloring and the tone….. I even know what type of tour I’m doing next. I’ll be very pleased if the vision I have in my head becomes a reality.”

Perry also revealed that she is simply a “singer-songwriter masquerading as a pop star” and stands by the fact that honest songwriting is very important to her. She has also stated that “I feel like my secret magic trick that separates me from a lot of my peers is the bravery to be vulnerable and truthful and honest. I think you become more relatable when you’re vulnerable.”

On the surface, she appears be this bubble gum and infectious pop star.  Beneath the surface there is an ocean of mixed emotions, a collection of hidden motives with lyrics deeply complicated enough to fill a dylanesque folk record. Her stuff is truly inspiring if you ACTUALLY LISTEN TO WHAT SHE IS SAYING!

As for Imagine Dragons, they too write all of their music. In fact lead singer-songwriter, Dan Reynolds, tends to write too many songs that can’t all be used on their albums. As a collective band, they all play drums. They have also admitted to being perfectionists when creating their INSPIRED songs for all ages out there. Much talent lies within this band. Its so incredible how spiritually addictive their music sounds can be. Alternative music in the past couple of years never sounded so “potent” like these guys do.

I am constantly reminded of their songs profound meanings. To know what it is like to be human and have real pain and emotions that we tend to bury, hide and ignore. We all make mistakes. We all deserve a second chance. But we all must learn to forgive ourselves. We cannot let the sins and the black coins of our life fill up the jar of our minds and soul or else there will be no more room for love.

4) Is today’s music ONLY catchy and NOT inspiring?

NOPE NOT TRUE! There are a lot of bands nowadays that I really enjoy. Plenty of bands I do not like either. But it was the same in the 90’s and the 80’s etc… NOT exclusive to today’s music at all. If I wasn’t “inspired” by “today’s” music then I wouldn’t even have this blog and I wouldn’t be trying to expose today’s music to my friends and family. It’s not just a bunch of glamorous sell out trash thats being played on the radio and bombarding your tv commercials. There’s A LOT of talent out there! You should check out St. Vincent (aka Annie Clark) who is an amazing singer, songwriter and multi-instrumentalist. A female who pops weird stuff out like David Byrne and Wayne Coyne like you wouldn’t believe. You just have to do your homework, dig a little deeper, open your mind and get your facts straight before making false claims and assumptions. 🙂 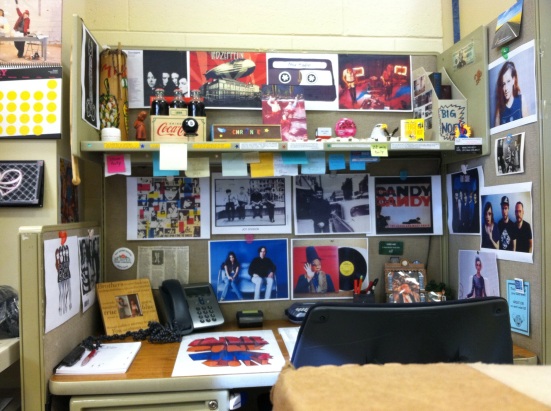