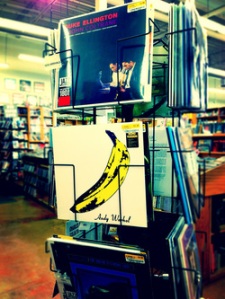 This is an incredible song! A joyous celebration of the power of rock ‘n’ roll! I name it as my favorite rock and roll song ever written and recorded. No pun intended. It has a real catchy hook to it. The lyrics evoke that sense of being saved by this music. I picture myself cruising through a busy street or by the ocean or on a country road or anywhere for that matter and listening to this rock song.

It tells the story of a girl named Ginny who was “just five years old,” messing with the dials of her radio in her car until she turned “on a New York station and she couldn’t be-lieve what she heard at all.” Lou Reed is a fantastic song writer and guitar player!

Lou Reed praises the glory of “Rock & Roll” with brutal delight in this Velvet Underground song of that simple title, seeing it as the solace of that young girl, previously mentioned when it explodes out of that radio. It is the third track on the band’s 1970 album, Loaded. I think a fresh audience discovered it when this ten-minute version appeared on Lou Reed’s 1974 live album Rock’n’Roll Animal. What a fantastic record that one is! But the song alone,”‘Rock & Roll,'” is about me, you, anyone really whose eyes and ears suddenly are opened. For me, if I did not hear any rock & roll on the radio, including the song, then I would not be the man that I am today.

But why do I love it? It just feels so damn good on my ears!!!

3 replies on ““Rock & Roll” by The Velvet Underground”

I think I prefer the Cale era of the VU, but this is a great song.